Excerpt from the second in the Wyoming Romances series, the sweet contemporary paranormal
Getting It Right 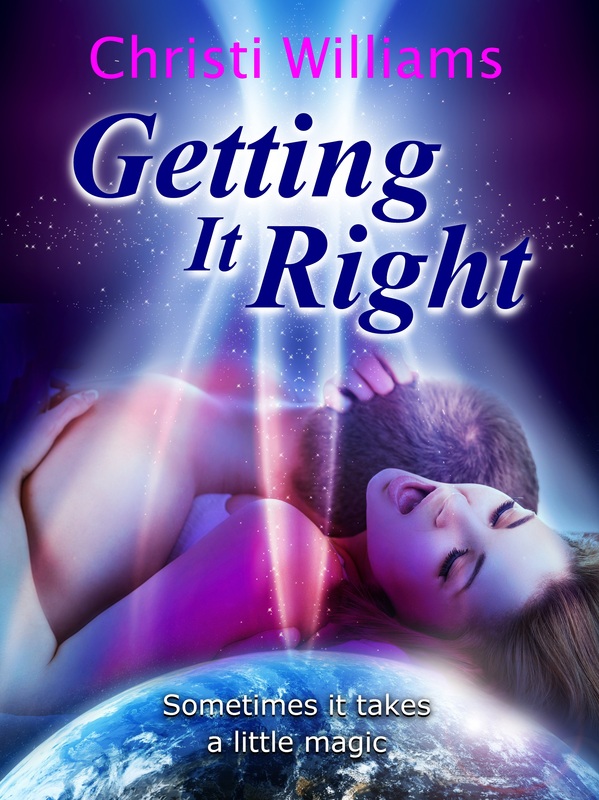 Selene rolled her eyes after scanning the posterboard sign propped next to the door of the library’s meeting room. In this era of online information, the local library must really be hurting for walk-in patrons if they had to resort to this sort of entertainment. She herself had almost had to be dragged here. The last thing she wanted right now was to have her palm or her aura read. In fact she refused to even consider it. Deep inside, where the truths she was afraid to examine resided, she knew all the indications for the unhappy ending she predicted for herself could be revealed today if she let her guard down.
Inside the meeting room, Selene and her long-time friend Sarah stood in front of a plastic folding table draped with a blue silk shawl and printed with silver stars and white crescent moons. Really, could it get any more phony? Selene thought. But Sarah giggled and nudged Selene, wanting to continue. A woman with shoulder length dark hair and piercing dark eyes watched them from the other side of the table, her hands toying with an oversized deck of cards.
“You first,” Sarah said.
“I only came here today because you wanted to, Sarah,” Selene answered. The woman seated behind the table continued to watch them closely. Sarah’s fidgeting and giggling made Selene feel like a teenager, definitely not a good thing in her estimation. “I worked late last night. I’m tired. Let’s just get this over with so I can go home to bed.”
“Sit down,” the woman seated behind the table invited, gesturing to the chairs placed in front of the table.
Selene glanced at the woman, certain she would see it was Sarah being addressed. But instead the tarot card reader looked directly at Selene. A shiver ran down Selene’s back at the woman’s unblinking dark-eyed scrutiny.
Selene shook her head. “I don’t want my fortune told.”
“Maybe you should allow me to take just a peek at the cards for you,” the woman insisted in a soft voice. “There might be interesting things in store for you. Things that you’ve never dreamed possible.”
“Right. Like what? Tall, dark, and handsome?” It sounded to Selene’s own ears like she was sneering at the woman’s talent, so she probably was. No, she definitely was. But the woman didn’t seem to take offense. “You never know,” the card reader answered softly.
Selene shrugged, turning her back and walking away, beginning a slow circuit of the other offerings lining the meeting room’s walls while she waited. Sarah took the proffered seat across from the tarot card reader and immediately became engrossed in whatever the woman proceeded to tell her.
Selene kept moving, afraid if she sat while she waited for Sarah she would fall asleep. Reiki she read on one card atop a blanket-draped bench. Life force healing through the laying on of hands.
Reflexology was printed on another sign taped to the door of a smaller adjacent room. Reflexes in the hands and ears and especially the feet correspond to every part, gland and organ of the body!
There were tables for Hypnosis. For Crystals and Meditation, and one for a devotee of something called Spirit Guides. That particular woman came prepared with large fold-out displays that explained how to identify and understand the messages sent by spirit animals to humans.
Part of her bored, a small part fascinated, and a large part amused, Selene wondered how these practitioners of alternative therapies managed to survive in southwest Wyoming. They must constitute a veritable underground belief system in a place populated by rough oilfield workers and their giant pickup trucks.
Only one of the many exhibitions caused Selene to stop long enough to actually read any of the literature scattered across the table top. Ghosts explained how the belief in spirits was ancient. Practices of spiritualism and ritual magic were not just intended to return restless spirits of the dead to their repose, but for the living to interact with them.
The explanation caught her attention because it jibed with her own beliefs. Animism one page of a brochure read: the belief that spirits existed in all things, animate or inanimate. The universe itself possessed a spirit, and the spirit of everything combined was universal. Selene knew this to be correct because her nona had told her so.
Selene was the last of a long line of streghe or nature witches. With a history stretching back before the time of the Etruscans, the old knowledge was now almost buried by the avalanche of Christian doctrine blanketing the fertile valleys of the Dolomites. By the time the belief filtered down through the years and distance from Europe to reach Selene the flame burned so low it had almost guttered out.
But not quite. She still believed in the ancient agrarian spirits, the gods and goddesses of Nature and fertility, agriculture and fecundity. Even though she lived in the dry high desert and had for her whole life. Even though her last true link with the old religion, her nona, had been dead for twenty years.
And that’s why, when she completed the circuit of the room and stood once more before the dark-haired psychic, almost against her will Selene extended her hand to receive the business card the woman held out to her:

“Call me,” Madame murmured, her finger tapping the card where her phone number was printed. “Make an appointment. Please. I can help you.”
In spite of the pull of modern rationality and the tendency to disbelieve, the inner voice strongly urging her to run before she made a choice whose consequences she couldn’t control, Selene stared helplessly into the deep pools of the woman’s hypnotic eyes. “All right” she was aghast to hear herself agreeing.

“What do you suppose she wants to help you with?” Sarah asked as they walked out to her car.
How should I know? I don’t need her help. I’m fine.”
“She saw something.” Sarah nodded wisely. “You should listen to her. You know you’re unhappy; maybe she can tell you what you can do to fix it.”
The door of Sarah’s old Taurus squealed as Selene pulled it open. Once seated, she had to yank hard several times on the seat belt to get it to unwind enough to buckle across her lap. “I’ll tell you what you can do, you can buy a new car. This one is piece of shit.”
“Yeah. So what? I can’t afford a better car. And don’t change the subject. Are you going to call Madame Fortunata?”
“No. I. Am. Not. Now will you drop the subject, please?”
“You should call her, Selene.” Sarah ground the car’s starter and glanced over her shoulder before backing out of the parking space. Selene turned to look out the window so she wouldn’t have to meet Sarah’s eyes.
“One of these days. Maybe. Does that satisfy you? Are you happy now?” Selene wished Sarah would just drive and quit talking. They might be best friends, but Sarah pushed the limits sometimes.
“I think the real question here might be, Are you happy, Selene?”
Selene just grunted. She had a boyfriend and a lover, a house, and a job. Sarah had just one of those things, a boyfriend. So pray tell, if Sarah was so perkily cheerful all the time, with all she had in comparison to Sarah what reason did Selene have for not being happy?

The light of the full moon shining on her face woke her. She hadn’t meant to fall asleep. She hated to admit it, but half the excitement Kevin represented came from the fact that Robert would hurt her if he found out. If she wasn’t so tired, she would certainly be more excited by tonight’s main event.
Selene, Selene, Moonbeam’s child. What do you harvest in the days—and nights—of your life?
She rose naked from the bed, careful not to wake her lover. For the moment she didn’t want any intrusion on her solitude. What pulled her was the old magic, and no matter the attractive portrait Kevin’s sprawled nude body made all silvered by moonlight, she didn’t want his physical distraction right now.
Silently she made her way down carpeted stairs, across the kitchen and out the back door. Kevin’s two monstrous dogs rose, neck chains rattling. But they didn’t bark. Lucky me, Selene thought as she stepped from the wet lawn to the cool, moist soil of what used to be a flower bed, now gone all to weeds.
Her grandmother had told her that the land was ready for planting when it reached body temperature. If she could sit comfortably, bare-ass naked in the soil of Kevin’s yard, the earth would welcome seeding. Selene had always had a green thumb, her legacy from her female agrarian forebears. She had no place to plant a garden, but her house plants flourished with a verdant gusto that almost made it seem sometimes they were trying to break out of the confines of her house.
Of course, Kevin accepted none of Selene’s nona’s wisdom. Selene had told him over a bottle of Rolling Rock one spring night that root crops like potatoes and carrots should be planted by the dark of the moon. Those that bore above-ground needed planting by the moon’s full light. Kevin had scoffed, saying he had no intention of planting anything, that she was only giving him more proof of her witchy woman ways. And wouldn’t she like to prove her powers someplace where he’d have a better chance of believing her?
The men in her life—and there were usually more than one lately—made Selene feel insubstantial when they laughed at her. As if when she talked her words floated unheard into the ether, as if she had no reality to them outside of bed.
She leaned back on her elbows, tilting her face toward the moon. The damp earth cradled her flesh where it touched, all along the length of her legs, shivering her and yet warming recesses a mere human lover had never yet reached.
An owl passed, its wing beats so near Selene could almost feel the brush of feathers on her face. It sounded like the heartbeat of the earth, keeping time to a rhythm so ancient she felt she could touch eternity. She closed her eyes and dug her fingers into the soil, whispering in kinship to the earth and her dead nona. Kevin’s dogs snuffled in response, shaking themselves fully awake and breaking Selene’s fleeting mystical mood.
Tossing her head at her own foolishness and the urge that had driven her out naked into the night, she brushed loose soil from her thighs and buttocks. Not bad, she thought, hands sweeping the curves of her body while her eyes scanned the darkened windows of Kevin’s neighbor’s houses, wondering if her nighttime wanderings had been observed. Kevin would be pissed when he found out his dogs, a Rottweiler and a pit bull, hadn’t let out a whimper when she’d entered his fenced backyard. He certainly wouldn’t believe that no dog ever barked at Selene.