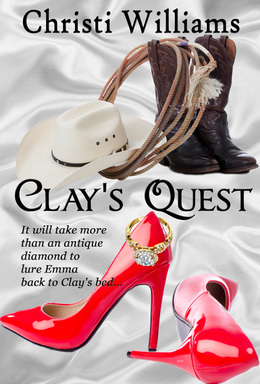 ​Clay's Quest
She’ll do anything to get her way.
Tall, elegant and beautiful, Emma Thorpe has wanted a baby for years. The yearning for a child occupies all her thought, her time, her effort, and any money she and her husband can scrape up for medical intervention. After trying and failing to conceive, the solution that finally comes to her is to leave her husband and hope to find a man—any man—capable of fulfilling her deepest desire.
Big, handsome Clay Thorpe isn’t the kind of man to let his wife just wander away. It takes a few months of Emma’s absence from his bed to devise a plan, but he’s determined. Eventually, Clay lures Emma home with a convoluted strategy only he could concoct, involving an antique diamond ring, sex three times a day, and...a turkey baster? 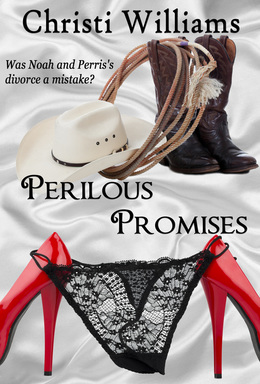 Perilous Promises
She can survive anything except the men who love her. Perris Dalton doesn’t need a man. She left southwest Wyoming broken, so transformed by fighting cancer even her big hunk of a lawman couldn’t make love to her. Now she’s back.
Her new job is to mitigate conflicts with raptors at a power plant’s coal mine. There’s no reason for her path to cross her ex-husband’s. But when an environmental demonstration inexplicably centers in on her, Sheriff Noah Dalton steps in, confident he can win back the woman who once walked out on him.
As the demonstration spirals into personal attacks, Noah, Perris’s father the sheep rancher, and her brother the college student hatch a secret plot to protect her. In an epic contest of wills with a lone woman survivor used to solving her own problems, and three Western heroes just as determined to save her, all hell starts to break loose. 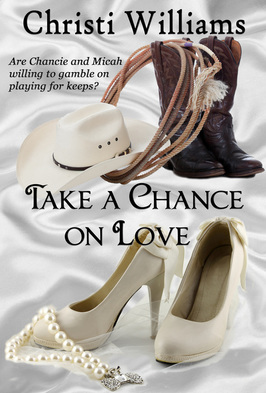 Take a Chance on Love
When Chancie de Leur meets highway patrol trooper Micah Taylor one frosty Wyoming night, instant sexual heat kindles between them.
Chancie’s a lonely young widow who owns her own business and Micah is divorced, so there shouldn’t be anything holding them back.  Micah does wonder if the fact of Chancie’s obvious wealth might become an issue, or maybe the fact that she’s apparently the second woman in his life who has zero interest in ever having his baby.
But Micah has no idea what a real problem between him and Chancie might be until meets her son.  Ten-year-old Jamie de Leur is determined to break up his mom and her lawman, and Micah himself questions if any relationship with Chancie is worth dealing with the spoiled kid she’s raising.
In a showdown over Jamie breaking the law, Micah has to decide if he wants to be Chancie’s cop – or her family man.